How the Elderly Lose Their Rights

Guardians can sell the assets and control the lives of senior citizens without their consent—and reap a profit from it. 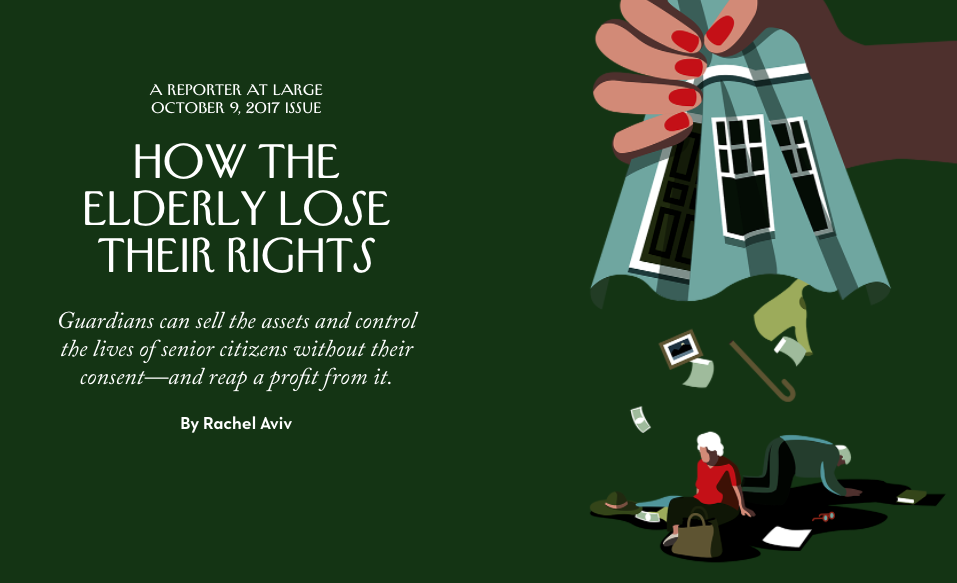 For years, Rudy North woke up at 9 a.m. and read the Las Vegas Review-Journal while eating a piece of toast. Then he read a novel—he liked James Patterson and Clive Cussler—or, if he was feeling more ambitious, Freud. On scraps of paper and legal notepads, he jotted down thoughts sparked by his reading. “Deep below the rational part of our brain is an underground ocean where strange things swim,” he wrote on one notepad. On another, “Life: the longer it cooks, the better it tastes.”

Rennie, his wife of fifty-seven years, was slower to rise. She was recovering from lymphoma and suffered from neuropathy so severe that her legs felt like sausages. Each morning, she spent nearly an hour in the bathroom applying makeup and lotions, the same brands she’d used for forty years. She always emerged wearing pale-pink lipstick. Rudy, who was prone to grandiosity, liked to refer to her as “my amour.”

On the Friday before Labor Day, 2013, the Norths had just finished their toast when a nurse, who visited five times a week to help Rennie bathe and dress, came to their house, in Sun City Aliante, an “active adult” community in Las Vegas. They had moved there in 2005, when Rudy, a retired consultant for broadcasters, was sixty-eight and Rennie was sixty-six. They took pride in their view of the golf course, though neither of them played golf.

Rudy chatted with the nurse in the kitchen for twenty minutes, joking about marriage and laundry, until there was a knock at the door. A stocky woman with shiny black hair introduced herself as April Parks, the owner of the company A Private Professional Guardian. She was accompanied by three colleagues, who didn’t give their names. Parks told the Norths that she had an order from the Clark County Family Court to “remove” them from their home. She would be taking them to an assisted-living facility. “Go and gather your things,” she said.

Rennie began crying. “This is my home,” she said.

One of Parks’s colleagues said that if the Norths didn’t comply he would call the police. Rudy remembers thinking, You’re going to put my wife and me in jail for this? But he felt too confused to argue.

Parks drove a Pontiac G-6 convertible with a license plate that read “crtgrdn,” for “court guardian.” In the past twelve years, she had been a guardian for some four hundred wards of the court. Owing to age or disability, they had been deemed incompetent, a legal term that describes those who are unable to make reasoned choices about their lives or their property. As their guardian, Parks had the authority to manage their assets, and to choose where they lived, whom they associated with, and what medical treatment they received. They lost nearly all their civil rights.